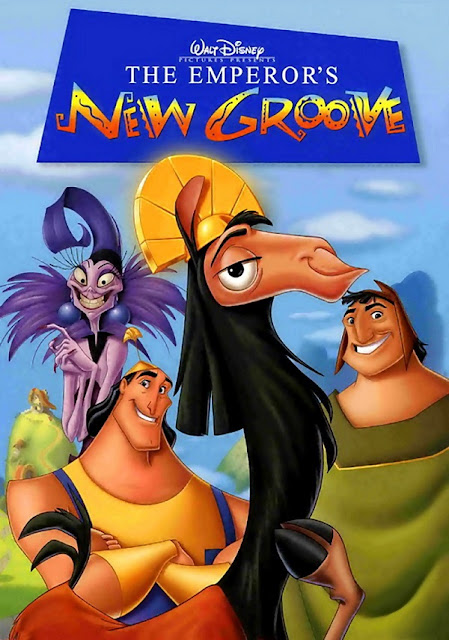 The Emperor's New Groove, Disney's 39th animated feature is now available on video and on Disney DVD in two versions: the standard one disc DVD (reviewed below) and a deluxe two disc collector's edition set titled The Ultimate Groove, which will be reviewed next week.

Set in an unnamed Latin American empire, The Emperor's New Groove introduces us to the ruler of said domain, the spoiled-rotten Emperor Kuzco (voiced by David Spade). He leads an excessively charmed life where his every whim is catered to; as his 'theme song' states, it is his "perfect world." His pampered existence is threatened by the mutinous mechanizations of his recently fired royal advisor, the devious diva Yzma (Eartha Kitt). Aided by her studly side-kick Kronk (Patrick Warburton), her attempt to poison Kuzco in order to usurp his throne misfires, turning him into a llama instead. 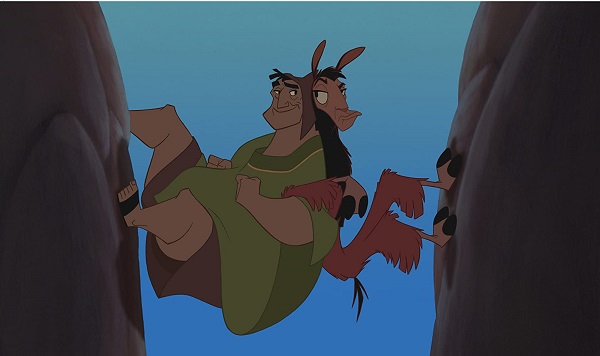 Yzma dispatches Kronk to do away with the now furry and four-legged emperor. But instead Kuzco ends up with the kindhearted llama herder Pacha (John Goodman), whom Kuzco had previously dismissed upon informing him that Pacha's simple mountain village was soon to be the site of his latest extravagance, a huge summer home dubbed 'Kuzcotopia'. A tempestuous relationship develops between the mismatched duo as Pacha agrees to help Kuzco in exchange for sparing his village. Further problems arise when the newly enthroned Empress Yzma discovers that her former boss is still alive, thus threatening her rule of this 'kingdom of the sun'.

The Emperor's New Groove is enjoyable at most, and hilarious at times, but the film never quite takes off into the comic stratosphere of such earlier Disney comedies as Aladdin or even Hercules. Credit is due the filmmakers for shirking the tried-and-true (and often unjustly maligned) Disney 'formula', but it is at the expense of creating a full-blooded Disney entertainment.

While ostensibly taking place in a mythical kingdom in some South American country, one never gets a sense of place. Aside from the Aztec-influenced architecture of the palace, the film could be taking place in any mountainous region. Add to that it's suffering from what I call "Dangerous Liaisons syndrome" (a complete lack of any regional dialect or accents), and this venture feels no more authentically Latin then a Taco Bell. 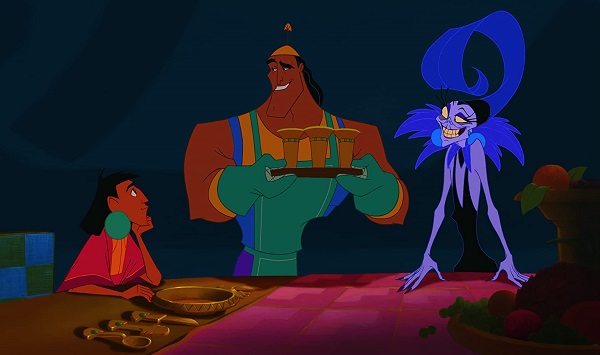 Much has already been said of this film's troubled production. At first a more straight forward action film titled Kingdom of the Sun, with songs à la The Lion King, it stalled in mid-development due to insurmountable story problems. It was resurrected as The Emperor's New Groove, a full-out, non-singing buddy comedy.

Lost in the shuffle were the songs written for the original story by Sting and David Hartley; in fact, Trudie Styler - a.k.a. Mrs. Sting - filmed a documentary on this whole unfortunate process, unflatteringly titled The Sweat Box. All that remains, save for the obligatory Oscar-bait power ballad sung by Sting over the end credits, is the splashy, Vegas-style opening number "Perfect World", crooned by underwear magnet Tom Jones as Kuzco's 'theme song guy'. This wackily over-the-top production number (complete with Riverdancing centurions) hints at how loony this toon could have been. While I'm not one to think that every animated film needs to be a musical, this story would have benefited especially if it had been musicalized more in this manner.

(To hear what 'might have been,' listen to the original soundtrack album, which features what will probably be the greatest Disney song never animated, Eartha Kitt purring "Snuff Out the Light (Yzma's Song)".) 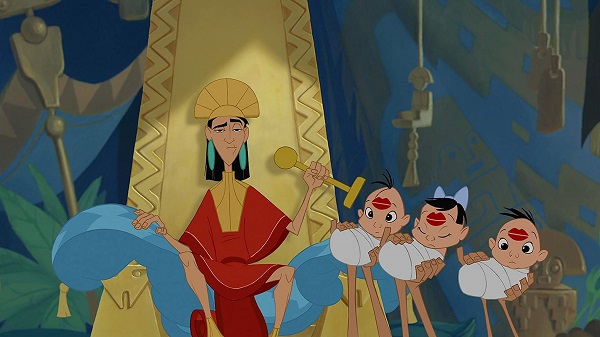 Such inadequacies are compounded by the main flaw within the feature, that is, a failure to create a likable protagonist. As it stands, Kuzco starts off as a self-centered, uncompromising childish brat and then... remains that way for almost the entire film. He constantly belittles and betrays the trust of the honest and loyal Pacha. Yes, there needs to be dramatic conflict between the two, but by pitting Pacha's unwavering goodness against Kuzco's constant selfishness, it's no wonder he elicits no sympathy, from us the audience, or the other characters for that matter.

This may in part be due to the voice acting of David Spade, who as a performer on the television series' Saturday Night Live and Just Shoot Me has consistently displayed his limited range: he never met a line he didn't whine. Such one-note characterizations may work fine in a five minute comedy sketch or half-hour sitcom, but not when you are trying to create a hero worth rooting for.

In contrast, all of the other members of The Emperor's New Groove cast shine. Pacha, when he's not dodging llama insults, shares some giggle-inducing moments with his rascally family: his strong-willed (and very pregnant) wife ChiCha (Wendy Malick) and his two mop-topped tots, Tipo and Chaca (Elia Russell Linnetz and Kellyann Kelso). Even minor characters such as a chatty squirrel and a brittle old peasant ("Beware the groove!") have their own funny bits. 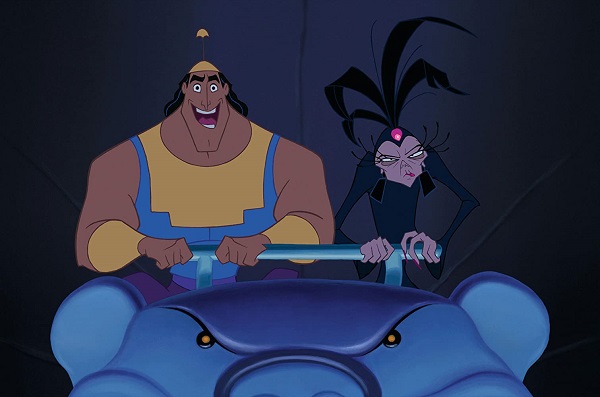 But it's the one-two comedic punch of Yzma and Kronk (the funniest odd couple on screen since Harold and Maude) that steals this movie, hook, line and sombrero. Theirs is a strangely synergistic relationship, the full depth of which is barely hinted at in this G-rated venture.

With her Venus Flytrap-eyelashes and bony frame, Yzma is a direct decedent of such comic Disney villains as Cruella de Vil, Captain Hook and Madame Medusa. She has yearned for high style and regal accoutrements all her (long) life, but is constantly tripped up by the lunacy surrounding her. Eartha Kitt, who's most famous role to date was as another campy villainess, the Catwoman in the classic Sixties Batman series, is perfectly (or should that be 'purrrrfectly'?) cast here, joyfully sinking her claws into the role's operatic eccentricities.

Patrick Warburton, best known for the dim-bulb, hunky mechanic Puddy on television's Seinfeld, brings a droll charm to the befuddled Kronk. He plays him as a sensitive soul trapped in the body of a linebacker. He may work for the bad guys, but he's not evil... let's just say he has fallen into the wrong crowd. Kronk is more prone to whipping up a batch of spinach puffs then whipping a foe into submission. 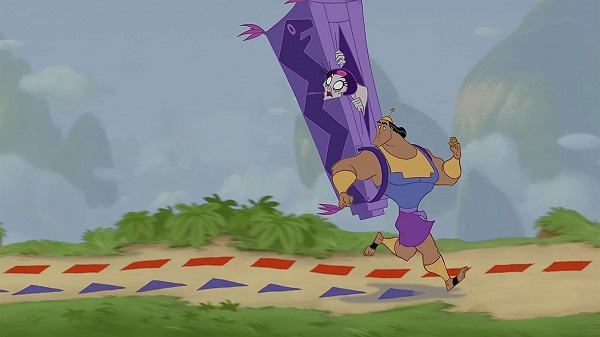 In another departure from the Disney norm, the film is heavily influenced by the style of legendary Warner Bros. short director Chuck Jones, most notably in the character of Kuzco. Just like his prankster predecessor Bugs Bunny, Kuzco uses every trick in the Looney Tunes handbook, from anachronistic dialogue to breaking the 'fourth wall' to talk directly to the audience. He even employs a classic comic device, dressing up as a woman to gain access to a jungle 'truck stop' called Mudka's Meat Hut. Some of these gags work well, but when they don't, the filmmakers' attempts at hip cleverness are painfully obvious, throwing off the film's pacing, it's own 'groove,' as it were.

There was a lot of potential in this project in it's many forms... a couple more whacks at this piñata would have revealed all of the goodies inside.

Standard DVD Extras:
Behind the Scenes - Three featurettes on the making of the film, also included on The Ultimate Groove: 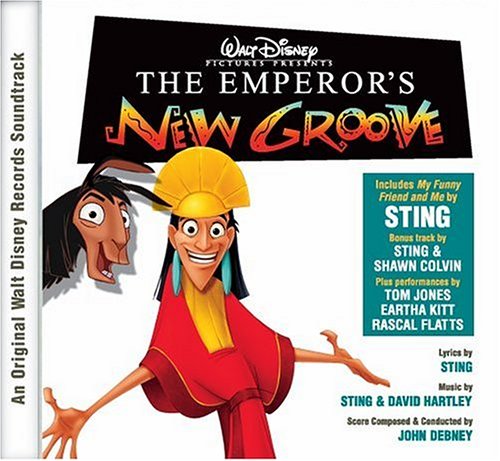 Sting's "Making the Music" Video featuring the Academy Award-nominated Song "My Funny Friend and Me":
Why does every pop song from a movie music video have to feature the singer warbling into a panty-hose protected microphone in a dimly-lit recording studio while promotional clips from the movie are edited in haphazardly? And why would they think we would want to watch them making such a video? Most Unintentional Laugh: Sting actually says "I like buddy songs (like "My Funny Friend and Me") they're not too sentimental." Huh???

Rascal Flats "Walk the Llama Llama" Music Video:
OK, this one is just plain weird. Kiddie dancers do the "Llama Llama" dance on a cheesy-looking set while bored-looking real llamas look on. There's even a little dancing man at the bottom of the screen that you can follow along with to learn the "Llama Llama" dance too! Burning Question: What exactly is a "sassy moonwalk"? (Both videos are also available on The Ultimate Groove.)

Deleted Scene:
In this scene, cut because it "emotionally didn't fit the tone of the picture," we view the "Practice Destruction of Pacha's Village." You can see why it was left out as it was a harsh example of Kuzco's selfishness. (Also available, with two other deleted scenes, on The Ultimate Groove.)

"The Emperor's Got Game" Adventure Game:
While most DVD games will hardly have you hocking your Play Station, this one benefits from the use of new dialogue recorded by Eartha Kitt and Patrick Warburton. Using your remote, you navigate Kuzco Llama through his treacherous trek from Pacha's house back to the palace by answering trivia questions about the movie. Best Lines: Kronk: "Yzma's still got this whole 'evil' thing going"; Yzma (after you miss a question): "Someone wasn't paying attention to the movie!" (Game also available on The Ultimate Groove). 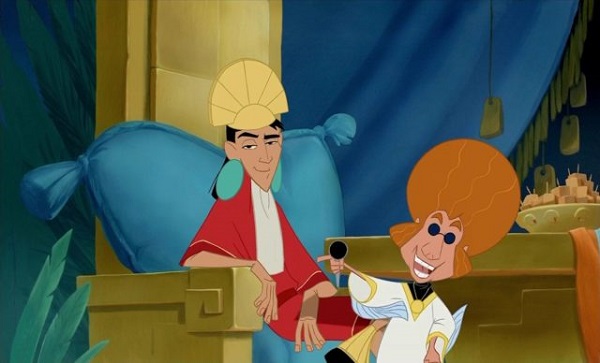 The Top 10 Things We Learn From This Commentary:


Check out next week's edition of Toon Talk for a full overview of the two disc collector's edition, The Emperor's New Groove: The Ultimate Groove.

Kirby Holt
Creator, head writer and editor of MOVIE DEAREST and member of GALECA: The Society of LGBTQ Entertainment Critics.

Archives of my Toon Talk reviews and articles originally featured on LaughingPlace.com from 2001 to 2011

An Inspiring Tale for All Ages The tale of John Henry is a legendary tall one. Born with "a steel hammer in his hand", he ... 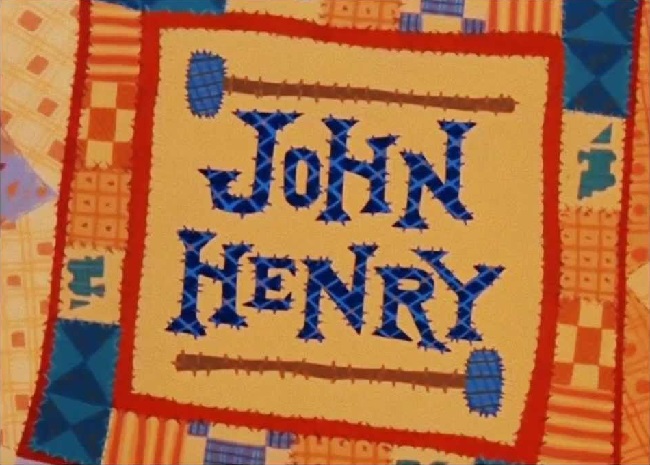 Kirby is a lifelong Disney fan and film buff. A frequent contributor to the LaughingPlace.com Discussion Boards, he currently resides near one of the Happiest Places on Earth: Orlando, Florida.